Have you ever heard of the All Star Chef Classic Los Angeles? If you haven’t, then let me share with you all ooh-la-la moments in this awesome event!

With a very impressive lineup of Michelin-starred and award-winning chefs, this star-studded gathering allows fans, like me, to have a more engaging dining experience from some of the world’s favorite Master Chefs. 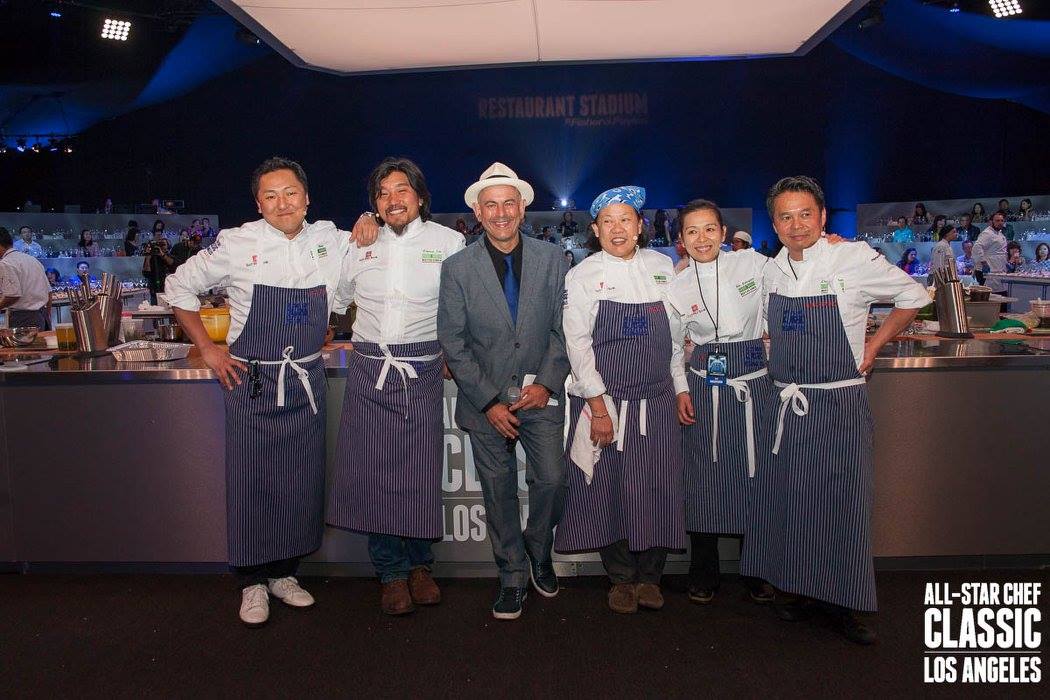 First stop, the All-Star Classic Chef East Vs West Masters Dinner presented by EastWestBank. What would you do when you finally get the chance to see culinary artists that you have been following for a very, very long time? Lucky me, I got the chance to see my favorite Master Chefs, Anita Lo and Edward Lee. I’m telling you, it was completely a humbling experience to be rubbing elbows with them.

Next is the Restaurant Stadium, acustom built tent on the event deck of LA Live. Upon walking in, you will see 3 tires of stadium seats surrounding a kitchen with a large video screen where the live feedswere shown, and of course, SimonMajumdar as the emcee. Wow! It really felt like I was part of one of my favorite shows, Top Chef, while indulging in their mastery which they call food. Prerecorded interviews by other celebrity chefs discussingeach of the style and techniques of eachall star chef were also presented.  A surreal moment indeed! 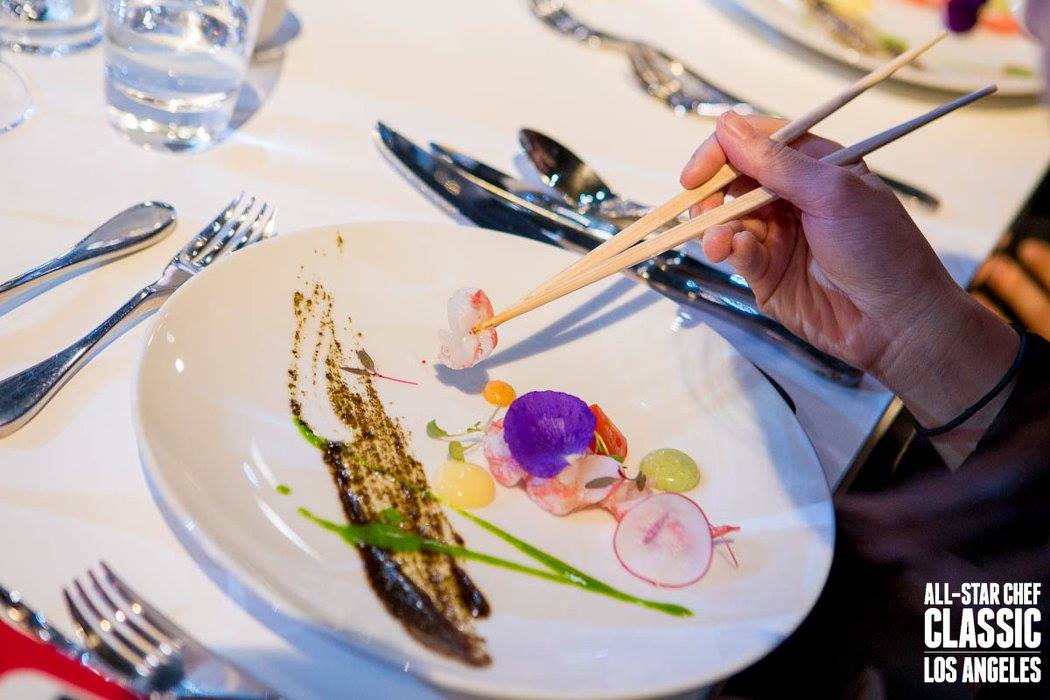 We were surprised with an amuse-bouche from each chef. Chef Niki Nakayama, who was voted by Citysearch’s “Best of Sushi” distinction in 200,6 welcomed us by her very own creation – Sweet Shrimp Sashim paired with Ty Ky, Sake. 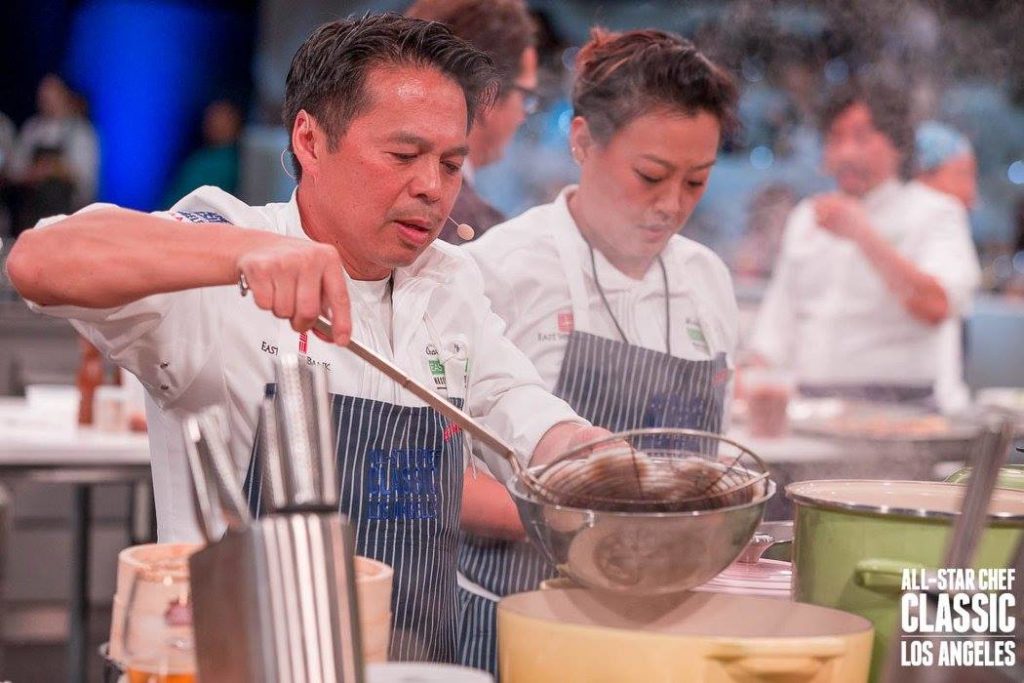 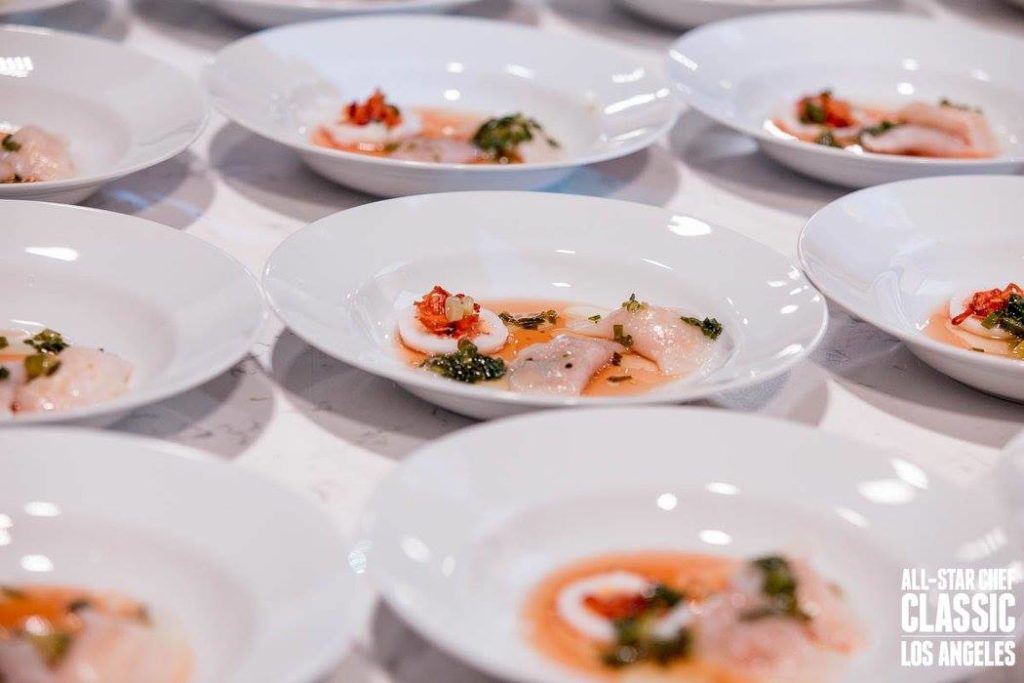 It was definitely one of the most colorful dishes of the night. Then, we got to taste Charles Phan’s Trio of Vietnamese dumplings, paired with Mischief + Mayhem, Puligny-Montrachet, France 2012. The dumpling were so good it is as if you were chewing gummy bears. Yum yum! It truly was the most perfect chewy skin I had ever tried. Ever. 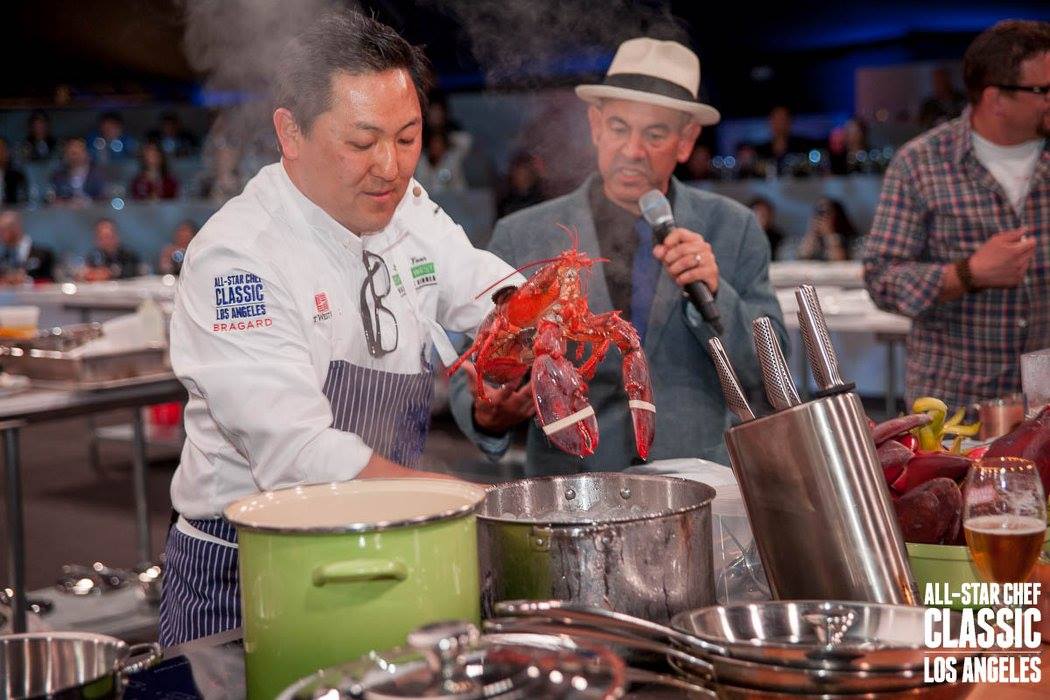 Sang Yoon is also one of my favorite Master Chef contestants, and fortunately, I got to savor one of his creations too! Dang, you should try his smoked lobster cocktail pickled banana blosson, herb “curry” dragon fruit, and coconut snow paired perfectly with Schlumberger, Riesling, “Saering”, Grand Cru, France 2012. 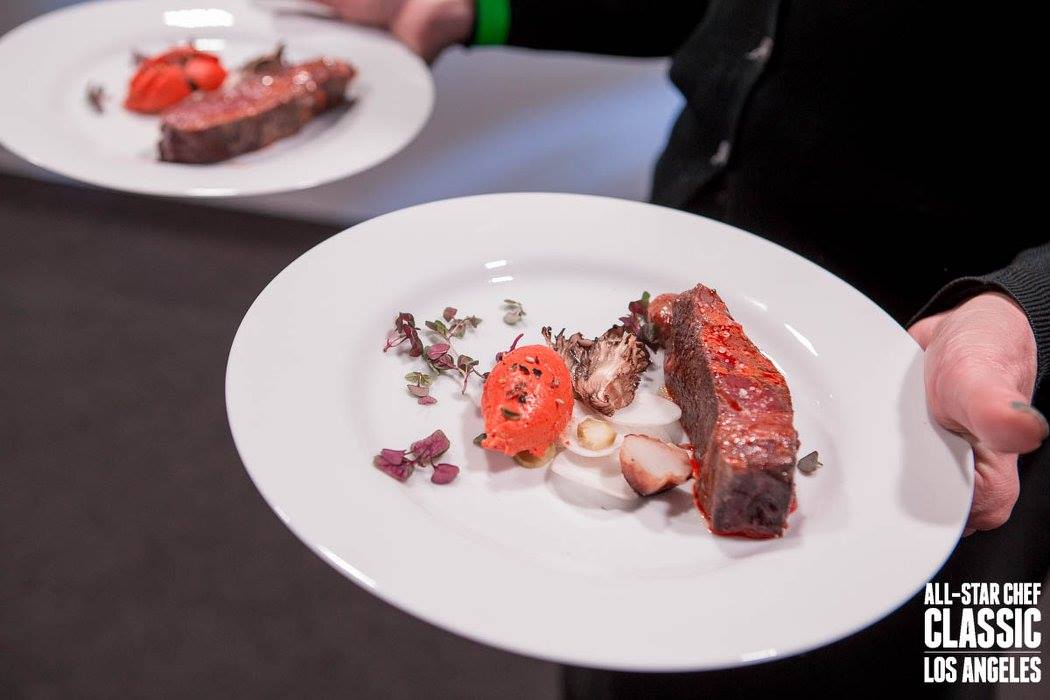 Food tastes even better with laughter, and Master Chef Edward Lee, totally agrees. From laying on the counter top swiging bourbon to his hilarious random rants on the specialties of the chefs are not even Asian cuisine, Ed filled our stomach, not just with his delish dishes, but also with hilarity. He then created the aged beef rib-eye, Gochujang butter, Furikake paired with Antiqv’s, Syrah, Pisoni Vineyard, Santa Lucia Highlands 2010. The Gochujang butter was incredibly delicious.  As bad as it was to just eat butter – I almost licked it clean! 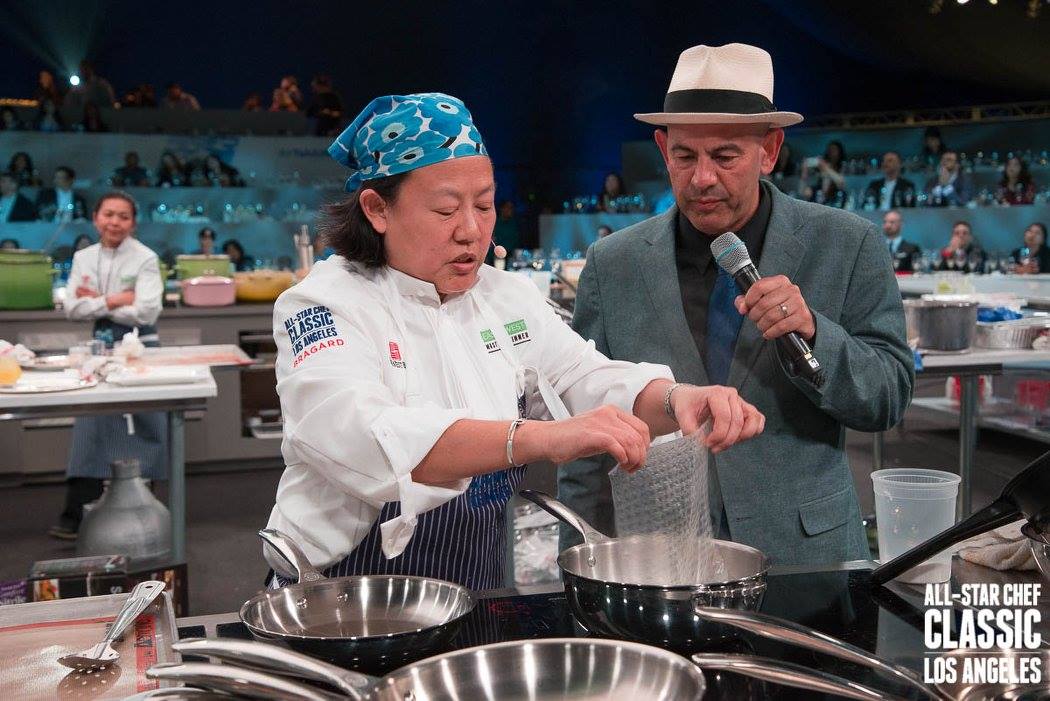 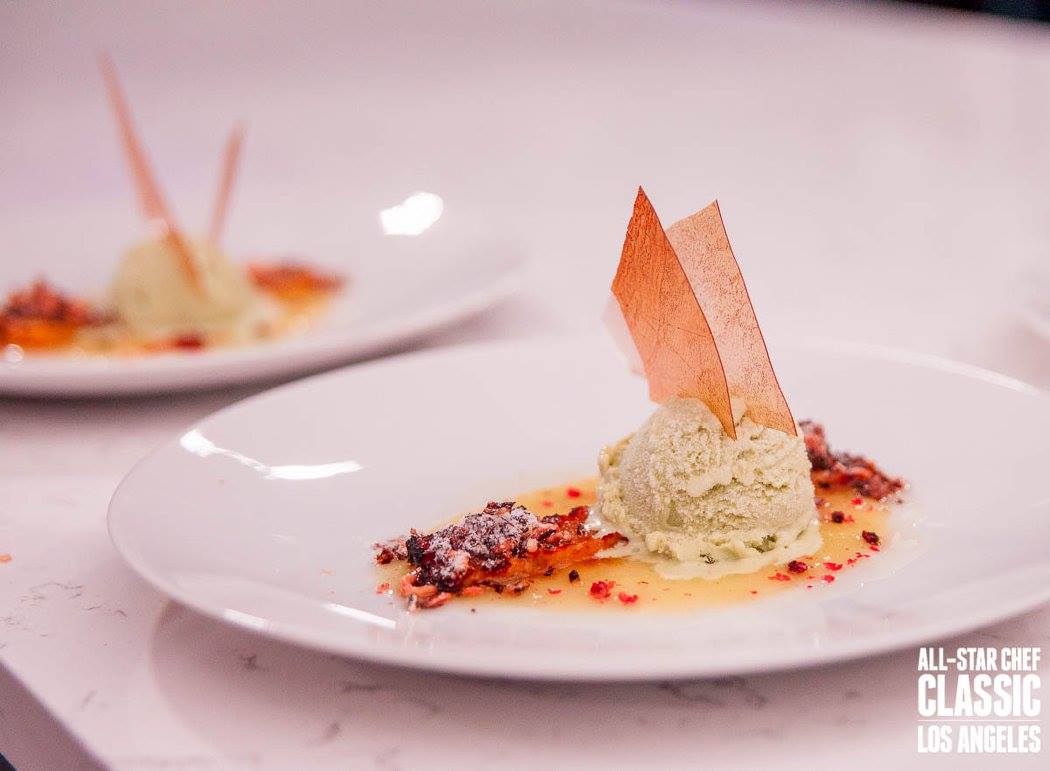 Lastly, Anita La! My all-time favorite Master Chef! Together with Michelin Stars, she created pineapple, pandanus, pink peppcorn for dessert and paired it with Laurent Perrier, Demi sec, Champagne, France NV. To use the chip on top as a candy substitute was just ingenious idea. 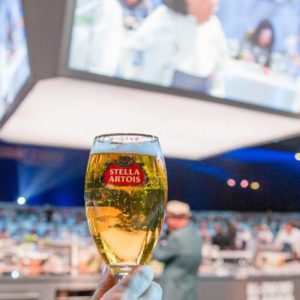 This particular show, if you will, was full of inappropriate innuendos and constant sharing cheers by Stella Artois Beer. It was not only a show but felt more warm and at ease than ever.

It was as if Ed Lee and Sang Yoon were my best friends from years ago and I am just at their home dining with them. It was incredibly mesmerizing and surreal to see these chefs in their element, creating and showing off their passion in the best way possible. 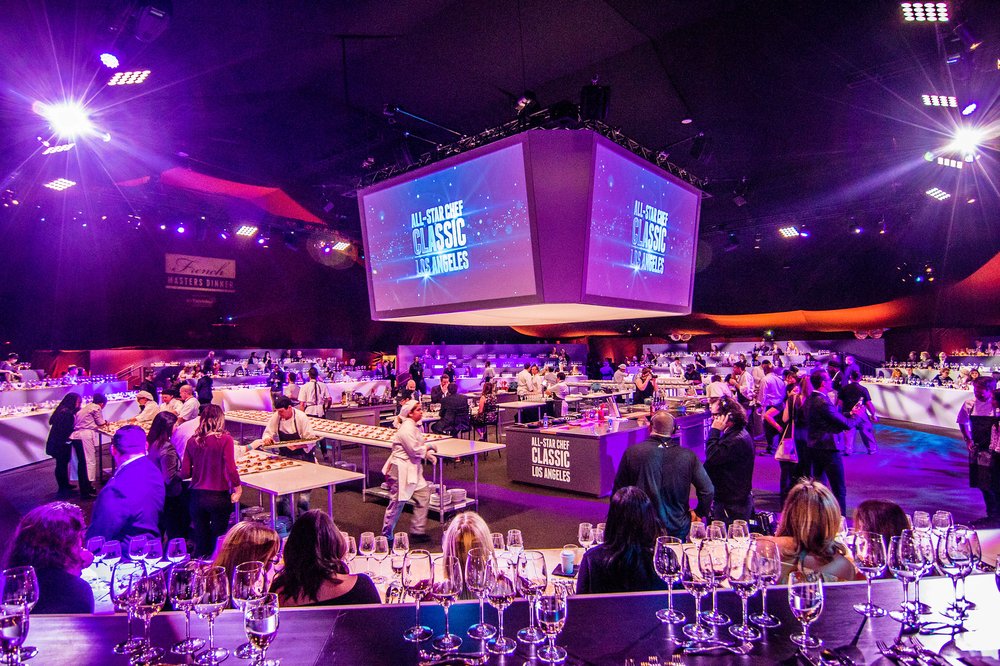